Bangkok night markets. Not what I was expecting. Night numero uno, we wimped out and went to the “new” train market, Rot Fai, which was only 11 kilometers away instead of 23. This was the result of a scarring cab ride earlier that morning that took one whole hour to drive 5 miles to a sports bar to see the Warriors game. The crew for Rot Fai was me, S, T, and Uncle S.

In preparation for a long ride, we got nice and lubricated with the classic Thai “buckets”, which in Thailand, does not mean a bucket of beers, but instead an actual bucket (like the one you bring to the beach to build a sand castle) filled to the rim with your choice of alcohol and mixer. We became accustomed to the buy one get one free deal outside our hotel, and our lady knew our order: mojito with gin.

So we slurped them down, laughing all the way because our cab driver seemed to have thought he was Mario Andretti, an unfortunate time for us to decide to take our sloshing buckets with us for the ride. We got there in record time and luckily with minimal spillage.

The market was a sprawl of brightly colored tents, swarmed by thousands of Thai millennials. We had discovered the hangout! What a display of Thai buying power. We observed fashionable twenty-somethings, laughing with their friends, analyzing products, sipping on cocktails and indulging in elaborate shared meals. We wandered around, highly buzzed, trying on sunglasses, bags, hats, jewelry and eventually throwing our Baht down for 3 watches each after realizing the conversion put the price at a staggering $3 a piece.

The market was much more modern than I anticipated. Markets in South East Asia, so far, had been of the flee market variety. I didn’t expect this sort of organization, these types of products, nor these types of shoppers. Basically it was totally mainstream, which I’ll admit was a little disappointing, but nonetheless, incredibly interesting.

We topped off the night with two bottles of Thai whiskey called Sang Som and the entertainment of two impressive Thai bands, the second who performed spot-on renditions of Rage Against the Machine and Nirvana favorites. We may have been the only people dancing in front of the tame Thai locals observing from a safe distance of 25 feet from the stage, but I have a feeling we weren’t the only ones having the night of our lives; just different cultural norms of expressing enthusiasm.

For some late night grub, we shared an eye-catching clay pot filled with a porridge like substance and topped with yummy delicacies like pork belly, fried egg, crispy noodle bits, and scallions. The rest went unidentifiable. We shuffled back into a cab, bellies full and minds buzzing about the unexpectedness of the market, the people, the music, and ourselves in that scenario.

The next night, Uncle S had returned back to the states, and we assembled a new crew. D, a friend we had met in Koh Phi Phi who was living in Bangkok, and J, who we met watching the Warriors game who happened to be from the town just next to mine. This time, we were going for the original Train Market, no more messing around. We wanted the authentic experience. We sought the strange action figures and vintage cars promised to us on the blogs we utilized for research. Again, we prepared for the ride with more buckets. Props to J for double fisting for the entire taxi ride. It was definitely a long haul, but luckily we filled the time with stimulating conversations about US politics. Those are the moments when it becomes so clear just how much I am learning and growing on this trip.

We arrived and our first impression was, “Oh shit. Same same, but different.” There were modern bars, storefronts boasting western prices, and again, rows and rows of tents offering made-in-China goods. But there were even more people, by at least twofold! Which was hard to believe because it was a Sunday night. We went straight for the food, wandering around the aisles of vendors, a little fried chicken here, some crispy maggots and silk worms there, mango sticky rice and spicy noodles and we were reenergized to get spending.

We made our way to the main shopping stalls and, like pros, skipped passed it all. We weren’t having a repeat of the night before. Twinkling lights and beautiful landscaping guided us to the far end of the market. We were on a mission to find this “vintage” section, if it even existed. Maybe we were too late! Maybe those blogs were from 2011 and all the authenticity had disintegrated as the Thai economy blossomed.

But, alas, we stumbled upon wide gravel streets with warehouse style shops lining the rows and goods laid out on tarp down the middle. We sifted through racks of “American Vintage,” and scanned a grid of over 200 used baseball caps. J bargained for a worn down, bright orange, Phoenix Suns hat, and S found a yellow windbreaker that fit like a glove and was embroidered with the phrase “Long live the King” on the back in script. 50 baht, thank you very much. (That’s $1.42).

We popped into a handful more shops and ended the evening with a grand finale of a mint condition Volkswagen Bus being lowered down from a tow truck. The bus was complete with a soft-top retractable roof, and three rows of perfectly upholstered bench style seating. We were all sharing fantasies of “Oh, the places we could go!” Eventually, we walked away from our daydream and found our way back to the main drag for a much quicker 1am ride back to Khao San Road.

We found our taste of authenticity, though it wasn’t the lantern lit market alongside rustic railroad tracks as we had imagined. If there’s one thing I’ve learned while traveling, it’s to have no expectations, except for the unexpected. What it comes down to, time and time again, for me, is the people you experience it with. In that regard, we came out big winners. We danced, laughed, and bargained our asses off. To me, this was the perfect way to experience Bangkok by night, doing exactly what a Thai person our age would do with their Saturday and Sunday night. 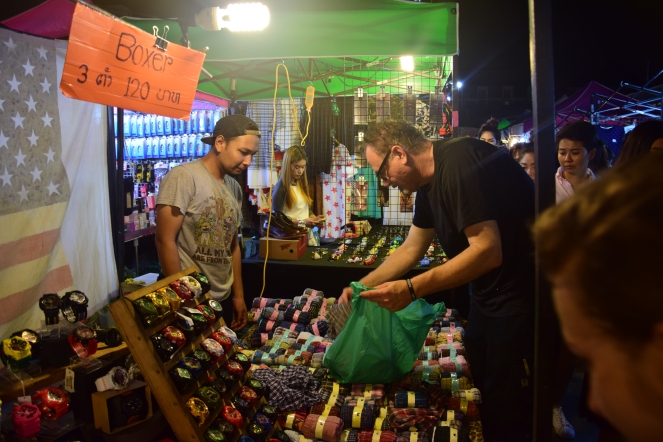 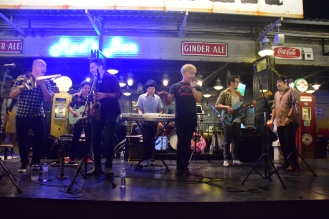 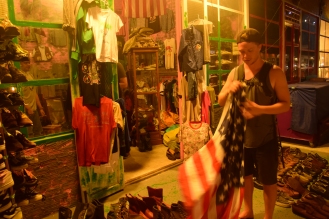 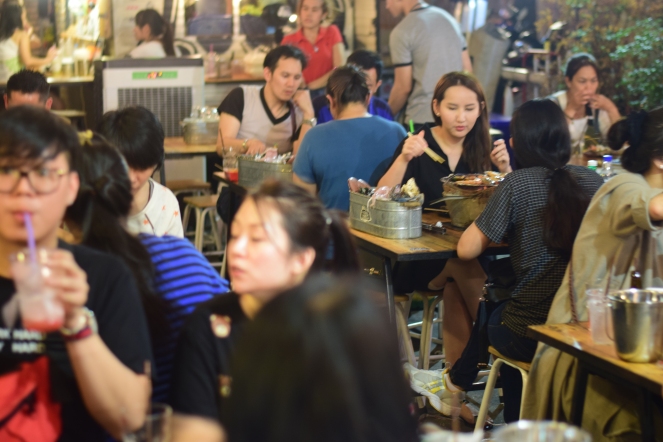 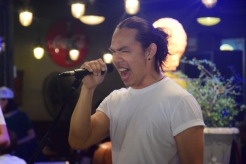