The Imperial City of Hue (pronounced “Hu-ay”), Vietnam. For 150 years, the epicenter of the Nguyen Dynasty’s rule. For 3 ½ weeks, ground zero of a deadly battle in the American War of Aggression. Now, Hue is a mid-sized city along with a few historic relics, a serene riverside, and a diverse selection of authentic Vietnamese food. We were inspired by Anthony Bourdain’s visit on Parts Unknown to do a bit of a food tour, searching for this city’s unique and iconic dishes.

Inside the old brick walls of the Imperial Citadel lives a sizable chunk of Hue’s local population. Nearby the town and the UNESCO World Heritage site, we sat at a café to kick off our Hue food tour. 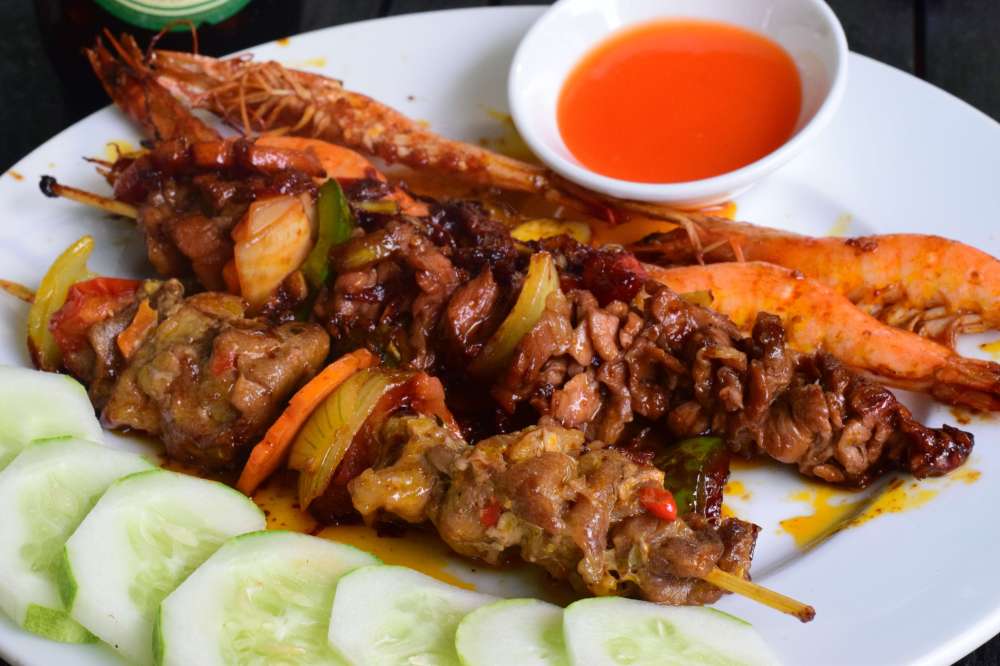 10 minutes later and 75% through an ice cold bottle of Huda (Hue’s local brewery), a ravaged plate littered with prawn guts and dipping skid marks accented by thick orange chili oil lies untouched on the table in front of us. This is the ugly reflection of two satisfied customers. A dish never looks good at the end, when everything that’s edible has been eaten. 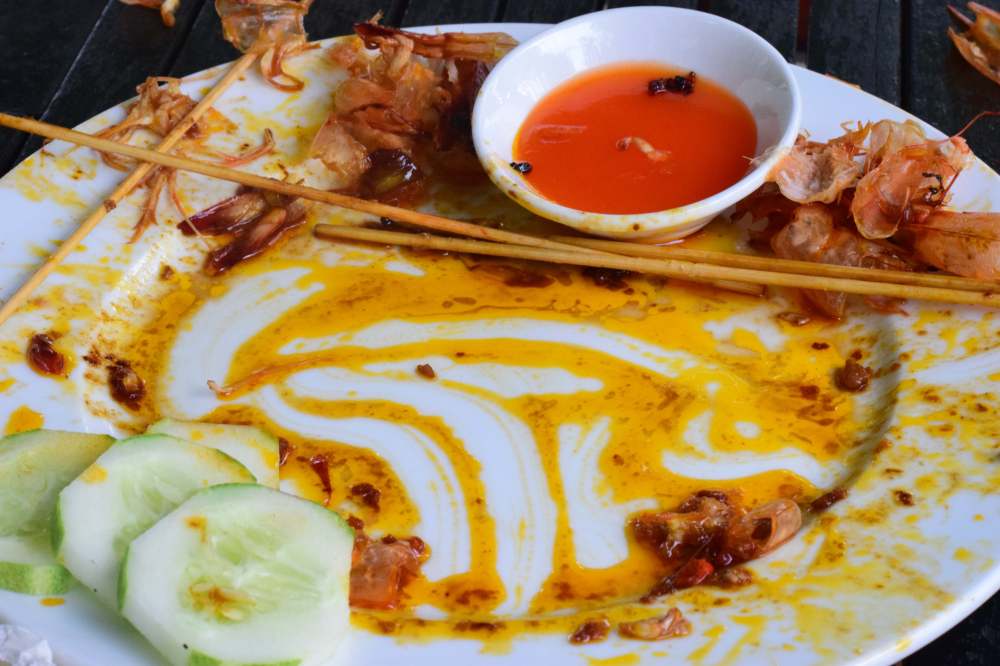 A travel idol illuminated our path to Dong Ba Market for the second stop of the tour. Situated just off the Perfume River, Dong Ba contrasts nature’s calm with human chaos. To get to the great food, overcoming the smell of the fish market an hour before closing time, and suppressing the various hawkers’ offers of Tupperware and t-shirts was necessary. Dante once said, “to reach heaven, one must pass through inferno”, or something like that. That’s how bad it smelt passing through, and that’s how good this messy bowl of spicy, crunchy, and freshness was once we reached it.

We were literally dragged into our seat by the arm when we told the eager purveyor of soup that we were looking for Bun Bo Hue. I blinked out of a brief hypnosis and suddenly realized I had bought another ice cold Huda Beer, before I even ordered it. But I submitted to the will of my waitress, a cold beer it is, how could I say no? Especially after two warm, mini-baguettes were delivered shortly thereafter.

After dozens of slurps and a minor bout of uncertainty when encountering the cow knuckle which gives this broth so much flavor, we dropped our chopsticks. The Bun Bo Hue was too much of a match; we just couldn’t finish it…the two of us.

There’s something about these Vietnamese soups, man. They are unconquerable. The plentiful broth, the fresh mung bean sprouts, the mint, the lettuce, the wonderfully strange cubes of congealed pig’s blood, the rice noodles, slowly expanding in our stomachs, until we are suddenly full. To be defeated by greatness is a good way to fail.

eTwo stomachs full of broth and one mission to go deeper into the bowels of Dong Ba Market. We were in search for Hue’s rice crepe with prawn and pork belly.

We saw a bright yellow folded pancake sitting on a dodgy countertop in the filth of Dong Ba. This was the crepe we’d been looking for. Adjacent to the countertop sits an aging dull metal pot, steam creeping out of the top as a high flame rages underneath. This pot has been the home to the prawn crepe’s sweet, porridgey counterpart since before I’ve ever dreamt of visiting Vietnam. Of that I am sure.

We had to have gotten the shit end of this stack of flapjacks. There’s no way people buy these things in the state that they were served to us. Soggy, oily, cold, and void of that pork belly we were looking for. Our cook (pictured above) forgot the prawn at first and when we reminded her of it’s absence, she pinched one out from under the flap of another crepe on display with her aged, lengthy fingernails and artfully placed it in ours, eyeballs facing out, of course.

Upon digging in, we were underwhelmed. The crepe was just a vehicle, vapid of taste in itself; just a cold, lifeless sponge in which the warm gooey porridge could find a home inside. Readers, I implore you not be dissuaded from visiting this stall in the heart of Dong Ba Market. Learn from our lesson. In this circumstance, to eat fresh, you must eat early. 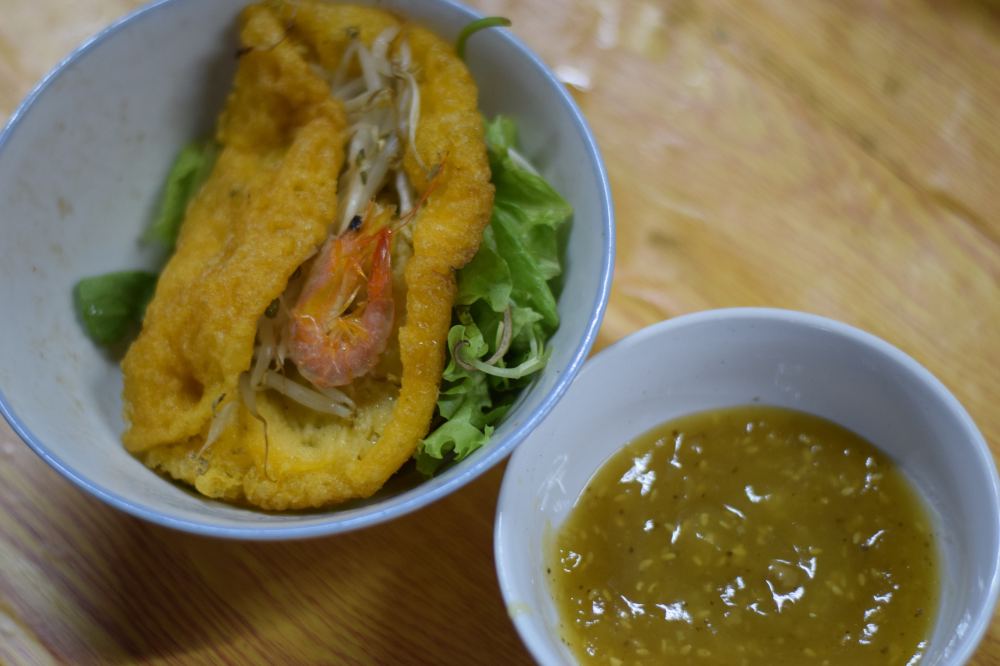 Cycling around Hue in search for its best local cuisine is more mentally exhausting than it is physically. The small city won’t impart soreness on the legs when cycled around all day. It’s the deciphering of menus, the disclosure of prices, and the finding of unmarked stalls in frenetic markets that’s tiring.

Our final stop was the easiest to find, luckily. The fluorescently lit street corner of Nguyen Thai Hoc and Ba Trieu offers something truly genuine to Hue. Co’m Hên – literally translates to “Clam Rice”. But it’s not as simple as it sounds.

The lady serving this stuff up is a fucking artiest (pictured above). Steamed white rice. Heaping scoop of tiny, broth soaked clams (sans shell). A dash of crispy vermicelli is mixed in there somewhere. 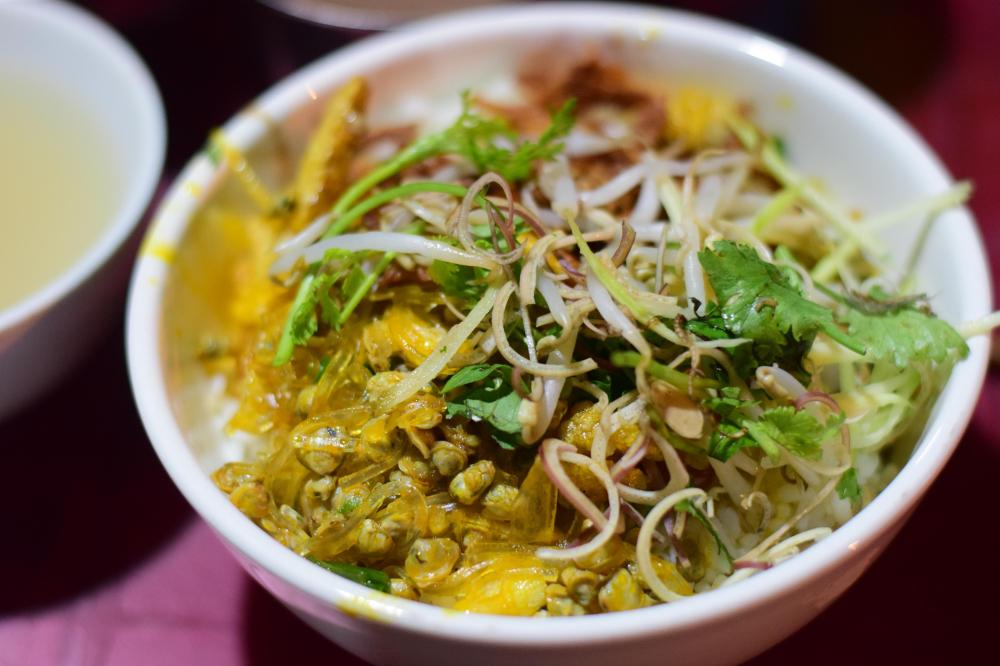 Deep fried shallots with garlic, crispy pork rinds or “Chicharrón” as they call it in the Philippines, fresh sprigs of mint, some dried chili flakes and a spattering of mung bean sprouts.

Then the finally, the secret ingredient. A few tablespoons of clam broth to moisten the bowl.